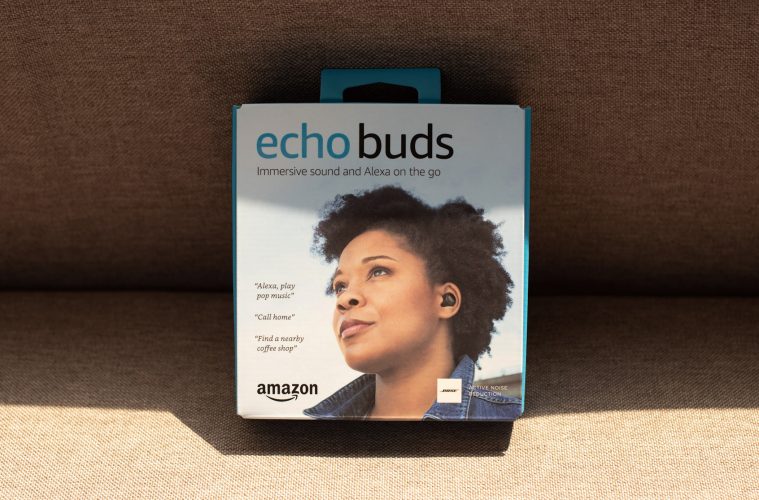 The Amazon Echo Buds aren’t the company’s first attempt at making its own hardware. Over the years, Amazon had released its range of smart speakers, ebooks, tablets and even phones as it continues to adopt a strategy where it believes hardware would drive usage of Amazon’s core businesses – mainly Amazon.com and Alexa.

The Echo Buds are interesting as true wireless earphones are undoubtedly the hottest product category that will be fuelling the holiday season sale and that Amazon has brought two features which help it differentiate itself from the sea of true wireless headphones – an always listening Alexa and Bose Active Noise Reduction Technology – all at a wallet friendly price of U$129 (~S$175).

The design of the Echo Buds is honestly, nothing to screen and shout about. In fact, it reminds me awfully of the Bragi Dash Pro (a product that was released more than 2 years ago) with its glossy touch controls. However, beneath its dull design lies a truckload of technologies that Amazon has cramped into the earbuds. Beside touch controls, the Echo Buds also have sensors to pause music playback when you remove the buds and even 3 microphone on each side to to listen to your voice. It also has an advanced chipset that powers the Bose Active Noise Reduction technology in it.

The charging case has a smooth matt-like surface that is prone to scratches. Less than a week of usage, we found many battle scars at the back of the case which can’t be removed. While the case spots Amazon’s iconic smile logo on its front, there is a button at the back of the case to set the earphones into pairing mode before you pair it to your mobile device.

One considerable downside of the charging case is that it still charges via a microUSB cable despite this being the year of USB Type-C. It also doesn’t support wireless charging therefore you’re pretty much stuck with bringing an additional microUSB cable while you’re commuting or travelling. The earbuds itself have a battery life of 5 hours per charge while the case contains an additional 15 hours. There is also a fast charge option that gives your Buds up to 2 hours of audio playback with just 15 minutes of charging in the case.

In terms of package content, Amazon has generously thrown in 3 sizes of ear tips and wing tips, a microUSB cable, the Echo Buds, a charging case and a quick start guide.

To get a more secured fit for working out, you can simply twist in the wing tip on each side and insert the bud snugly into your ears. I found that while it does provide some additional support, the tips themselves are pretty soft and flimsy so I wouldn’t depend too much on it to get a better fit.

To fully unlock the potential of your Echo Buds, I highly recommend that you customise it using the Amazon Alexa App. The catch is that, the app isn’t available in the Singapore App Store. Therefore your best bet to download the app on the iPhone is to sign up for a US Apple iTunes account or side load the Alexa .apk file if you’re using an Android phone. Trust me, it’s worth the trouble.

The Alexa app is intuitive and straight-forward. Launching the app, you will be prompted to select your device, set the device into pairing mode and the app automatically detects the earbuds.

Here are some of the functions you can tweak with the Alexa app:

Audio-wise, the Echo Buds aren’t the best sounding ones in the market. While they do support AAC & SBC Bluetooth codecs, I wished the earphones had more bass and a brighter sound profile. Nothing particularly stands out in your music and even at the loudest volume, the Echo Buds don’t get very loud.

But it would be wrong to judge the Echo Buds base on audio alone. Where the Echo Buds really shine is in its Alexa implementation, talk though and Active Noise Reduction.

Alexa on your Echo Buds is always listening – unless you turn it off. Think of it as an smart assistant that is always ready to carry out your tasks for you. With a total of 6 microphones, the Echo Buds did a great job listening for our “Hey Alexa” command. While the Alexa functionalities are pretty limited in Singapore, you are still able to check on the weather and time and also play certain songs when you connect your Spotify app to Alexa.

In terms of passthrough, Amazon Echo Buds have the most aggressive passthrough effect I have heard on a pair of true wireless earphones. When level 5 is selected, the surrounding noises get really amplified – a good feature to have if you would like to be aware of your surrounding while commuting or simply would like to listening in on gossips from the next desk.

Initially, I was a little skeptical of the Bose Active Noise Reduction on the Echo Buds. After all, it’s not the Active Noise Cancellation that we are familiar with on the Bose QuietComfort headphones. Double tapping the sides of the earphones twice allows you to toggle between talk through, Bose Active Noise Reduction and pure audio mode. The ANR on the Echo Buds are really, really decent, even though it doesn’t match up to the Sony’s WM-1000×3’s . Using it on the train or even while walking on the pathway, the Echo Buds are capable of reducing the surround ambient noise effectively without leaving a claustrophobic vacuum effect.

Would I recommend the Amazon Echo Buds? Absolutely. At S$175, it is considered to be in the lower-end pricing for true wireless earphones. There are many other earphones out there that cost twice as much and yet has less than half of the echo’s features.

Granted the battery life is a little short and the audio quality is no where near what an audiophile would appreciate, the Amazon Echo Buds bring to the table a pair of great value earphones with very decent active noise reduction and touch controls.