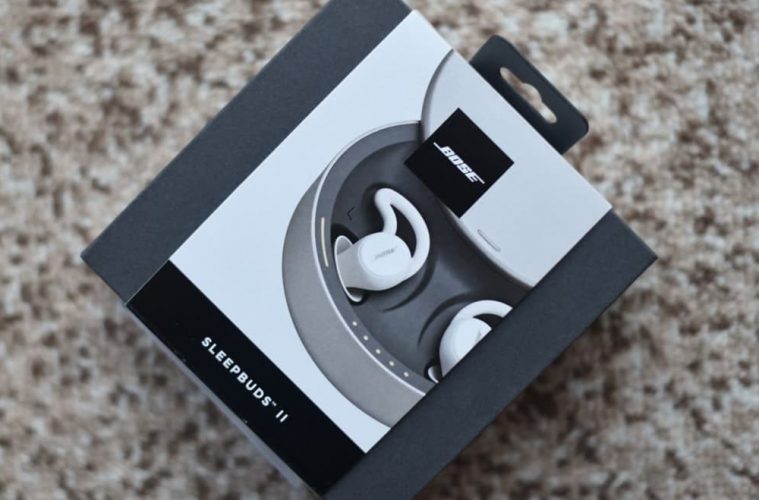 LudacusMarch 7, 2021
NewsReviews0 Comments 0
More than just a one night stand
Works to give you a good night's restLightweight and comfortableMask external noises well
Expensive for its single purposeNo noise-cancellation
90%Overall Score

At a glance, you would be forgiven if you couldn’t tell the difference between the original Sleepbuds and the new Sleepbuds II. Bose probably adopted the “if it ain’t broke, don’t fix it” rule when it came to the design of the Sleepbuds II. It features the same silver circular charging case from the first version of the Sleepbuds.

To open the case, simply slide the cover up from the bottom. The sliding mechanism adds a premium feel to the product and once open, you will see the Sleepbuds tucked nicely in its charging ports.

The charging case comes with 7 LED indicators that tells you how much battery the case has left and also if the earbuds are charging. The longer outer lights on the inside rim of the case show the battery level of the Sleepbuds when they are in the case. The 5 round LEDs on the lower-center of the case show the power level of the charging case’s battery (each representing a 20% denomination).

The earbuds have a battery life of up to 10 hours per charge – more than enough for a good night’s sleep. Bose says that it will take up to 6 hours to charge each earbud fully while the charging case itself would need up to 3 hours of charging time. One of the issue I have with the case is that, even when you do not use the sleepbuds in the case, the battery of the case will drain by itself gradually .

The Sleepbuds II case charges using the standard USB-C cable. It doesn’t support wireless charging as of yet and there don’t seem to be any way of updating the Sleepbuds firmware via USB as well.

The first thing that surprises me about the Sleepbuds are how small they really are! If you ever had any experience with Bose QuietComfort or Sports earbuds, you would know that Bose earbuds are legendary huge. That’s also probably why the Sleepbuds will fit comfortably in your ear canals when when you sleep with your ears pressed against the pillow.

The Bose Sleepbuds II comes with very soft silicone eartips that also shapes itself to your ears to help block out external noise passively. There are 3 sizes of eartips in the box to help you find the right fit for your ears.

Before we go on any further with this review, you need to know that the Bose Sleepbuds II isn’t your typical true wireless bluetooth earbuds. It doesn’t have the capability to stream music, podcast or audio from your smart devices. Instead, audio files are downloaded onto the Sleepbuds via the Bose Sleep app to be played on the Sleepbuds.

The Bose Sleep app has a library of 50 sounds, including proprietary Bose-engineered noise-masking sounds and relaxation content. The app lets you listen to the different noise-maskings sounds and transfer them onto your Sleepbuds.

To connect your Sleepbuds to the app, first you have to take them out of the case and connect to them via Bluetooth. The pairing takes between 15-20 seconds and once pair, you get to name your Sleepbuds and also access to more options in the app.

While there are 50 sounds to choose from in the app, you can only transfer up to 10 sounds (depending on the file size, which you will be prompted on) onto your Sleepbuds. The sound library has a variety of sounds from noise masking to natures capes to tranquil. Again, do note the sounds are transferred directly to your Sleepbuds and are not streamed from your phone. You will also be alerted when there’s an incoming call (though you can’t answer it using the Sleepbuds) or even when you set an alarm on the phone.

You can also use the Sleepbuds indepently without connecting it to a smartphone thereafter but your alarm would not work and you won’t receive any phone call notification.

To be honest, I am not someone who usually have issues sleeping. However, after using the Bose Sleepbuds II for several nights, I definitely can see the attraction of these earbuds and how it can help people get to sleep.

First of all, comfort wise, the Sleepbuds are super lightweight and you hardly feel them in your ears. Due to its slim profile and soft silicone eartips, I had no problem sleeping with them even with my ears facing down against the pillow. Once you place it in your ears, it fits snuggly into your ear loop to provide an instant noise isolation. With the noise masking sounds on, you feel like you’re in another world – one without the white noise of the air-condition, or the random cars driving past from afar. I would say that my sleep quality has improved after wearing these to sleep.

Are they worth it?

At S$379, the Bose Sleepbuds II are … hardly cheap for what it does. It doesn’t stream content from your mobile devices nor does it take calls or offer any form of noise-cancelling. Yet, that wasn’t what the Sleepbuds were built for. For the very specific purpose of masking out noise to help you sleep better, the Bose Sleepbuds clearly delivers on that. While it might not appeal to a majority of the consumers, for light sleepers who find it hard to get a quality night’s rest in our bustling city, the Bose Sleepbuds would be more than just a one night stand 😉

The Bose Sleepbuds II can be purchased directly from Atlas for S$379.