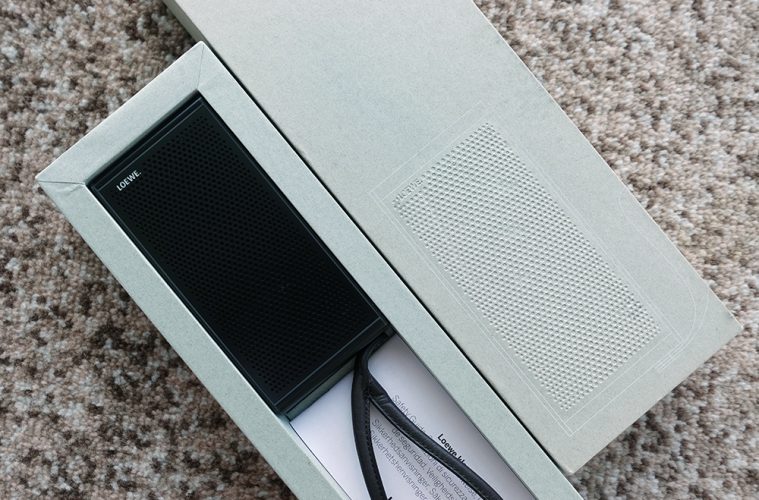 If you’re into high-end fashion, you would be familiar with the Loewe brand. The Spanish luxury brand specialises in leather goods and clothing and is one of LVMMH’s oldest luxury fashion brand. One lesser known fact is that Loewe actually manufactures tech products under its Bild (for TVs) and Klang (for speakers) line of products.

The Loewe Klang M1 is the company’s first portable Bluetooth speaker. If you’re curious about what the name means, Klang stands for ‘sound’ in German. Priced at S$299 (and now on promo at S$199), the Klang M1 comes in 3 colors: silver, graphite grey and rose gold.

The first thing that strikes me about the speaker was how good it looks. It had clean lines with minimalist sleek details and an expertly finished stainless steel body. Flipping around the speaker, you would find no visible screws or fixings. It is no surprise that the Klang M1 was awarded the iF GOLD AWARD for its design. With the dimension of 133 x 63 x 23 mm and weighting a mere 325 grams, the Loewe Klang M1 is highly portable in every sense of the word.

The Klang M1 comes with a very minimalist package content as well. Right out of the box, it comes with the Loewe Klang M1 Bluetooth speaker, microUSB cable, a quick start guide and a safety guide.

At the top of the Loewe Klang M1 portable speaker you would find four functional buttons. A power button that doubles up as a power and Bluetooth button, two volume buttons and a pause/play button. There is also an integrated microphone that turns the Klang M1 into a hands-free phone system.

At the side of the Loewe Klang M1, there is an aux-in jack for you to connect to your legacy audio devices via an aux-in cable and also a microUSB charging port.

While its competitors settle for synthetic leather or even nylon strap, the Loewe Klang M1 has a genuine leather wrist strap that lets you conveniently hold on to your speaker. It actually feel luxurious, living up to the Loewe brand name.

The Loewe has a built-in battery that promises up to 12 hours of battery life, which is fully rechargeable in just two hours. The Loewe Klang M1 also gives you true stereo sound when you pair two speakers together to be used simultaneously. It also has a strong Bluetooth connectivity (of up to 10m) and compatibility that ensures a seamless pairing of your devices. In my testing, the Klang M1 pairs quickly with my iPhone 12 Pro Max and iPad Pro.

The Loewe Klang M1 doesn’t just look expensive, it feels expensive and well built as well. At the top of the speaker are 4 control buttons: the On/Off power button, the volume up and volume down buttons and lastly the Play/Pause/Pairing button. It’s worth noting that only the on/off power button and the pairing button has a ring glow around it for easy controls in the dark. At the side of the buttons is a 5-dot battery indicator. To see how much battery there is left, simply press the on/off button once for it to be displayed.

I was pleasantly surprise at how good the Loewe Klang M1 sound. Don’t be fooled by its palm-sized dimension, the speaker contains 2 treble/mid-range units with a passive mid-bass radiator which gives it a punchy bass which you would usually not expect from such a small form factor. Even for vocal tracks like Sam Smith’s Too Good At Goodbyes, you could hear the rich and clear mids with tight bass. The M1 also comes with built in microphone which could capture clear vocals for voice call in an arm’s length distance.

The portable wireless speaker market is a rather saturated one, flooded with cheap, average sounding speakers in all shape and sizes. Although the Loewe Klang M1 isn’t the latest kid on the block, its timeless (and well constructed) design and great audio performance makes it a strong contender amongst the many in this category. It is compact enough for you to carry it around and its design would surely be a talking point at your next socially distanced gathering. If you appreciate good design and audio, the Loewe Klang M1 is definitely one you should consider.