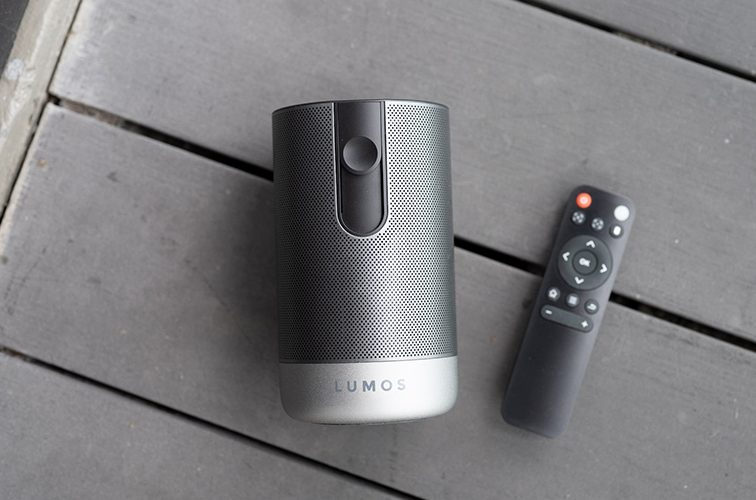 By now, you should be familiar with the LUMOS brand of projectors. Besides us reviewing the LUMOS AURO, LUMOS RAY and LUMOS NANO, the company has also been advertising aggressively on the major social media platforms which you would have surely seen their ads. The latest LUMOS ATOM projector is their latest flagship portable projector, costing almost twice the price of the LUMOS NANO. So is it worth its asking price?

Like all the other LUMOS projectors, the ATOM is packaged in a sleek minimalist hard carton box that feels quite premium. Included in the package are the ATOM projector, an HDMI cable, a power adapter, a remote control (with a USB dongle), and a user manual.

What I like about the LUMOS ATOM are the large touch controls that are built-in at the top panel. This gives you an option to fully control the projector, even when you do not have the remote control within reach. Some options on the top panel include volume control, back/submenu, Bluetooth pairing, etc.

The LUMO ATOM can be placed flat on any surface. A tripod mount at the bottom of the ATOM gives you the flexibility of mounting it on a tripod which is pretty important as it gives you more freedom in placing the projector.

Like most of the other LUMOS projectors, the ATOM also comes with a remote control. The only difference is that you are now required to plug in the USB adapter to use the remote. However, you can now use the remote as a moving cursor across the menu, allowing you to navigate better.

At the back of the LUMOS ATOM, you can find a power button, an AUX-out jack, 2 USB ports, an HDMI port, and also the power jack. A power adapter is included in the package and also an HDMI cable. This allows you to get started out of the box without any additional accessories. You may connect a thumb drive or a USB hard disk to playback content directly for your storage or you can hook up the projector to a PS5 or your laptop to directly mirror the content to the projector.

Another key improvement to the LUMOS ATOM is its ability to auto-focus. Previous LUMOS projectors come with their own focus dial which can only be focused manually. The auto focus on the LUMOS ATOM is largely accurate. All you have to do is to turn it on, position the projector facing the wall that you want to project on, and the ATOM will do the rest.

The LUMOS ATOM also comes with a built-in battery which makes it possible to bring the projector around without having to be connected to a power socket. Based on our test, the projector lasts for around 2 hours at the maximum brightness and is connected to a Bluetooth speaker. The ATOM also comes with a lens cover that protects the lens while on the go. I thought that this was a pretty small yet thoughtful edition.

The LUMOS ATOM runs on the same Android OS that is on the other LUMOS projector. It is a very stable and capable OS that would meet the needs of most consumers. By running on Android, you get to download almost all the popular streaming apps like Netflix, YouTube, Disney+ natively onto the LUMOS ATOM. The LUMOS ATOM also allows you to stream directly via AirPlay or Chromecast from your Apple/Android devices as long as they are connected via the same WiFi network. This is great for home parties where multiple users would like to share their content with the group.

You can also pin all your “favorite” apps onto the main navigation menu for easy access.

Like the other LUMOS projectors, the ATOM also gives you a huge range of customization in the settings menu. You can connect to a local wireless network or Bluetooth devices, and adjust the brightness, fan speed, pointer speed, and keystone all under this menu.

While the built-in speaker and pointer are really decent, I would really recommend that you connect the ATOM to an external wireless speaker and keyboard for the best watching and navigating experience.

Of all the LUMOS projectors, ATOM has the best size-to-value ratio. It is one of the brightest at 6,000 Lumens and yet is way smaller and more portable than the original LUMOS AURO projector. Even in a bright room, you can still enjoy the projection clearly which is impressive for a projector this size.

You can simply project it onto any plain wall (the wall in my room is actually in a shade of light grey but it works perfectly well) or LUMOS also sells an optional wall projector screen which you can purchase with purchase for just S$99 (usual S$189).

While the ATOM comes pre-loaded with most apps that you would need to get started, I love the option of having a built-in Google Play store for you to download whichever app you need. My mum only watches MeWatch which I had to download for her to catch up on all the local news and dramas – which makes this a great device for the elderly as well!

I also love the fact that you can AirPlay from any device that is connected to the same WiFi network onto the ATOM. Just imagine your friends and family members taking turns to stream and share their favorite YouTube videos onto the big screen during Chinese New Year or any festive gatherings!

However, I think one of the most underrated apps on the LUMOS ATOM is the EShare app. This app which is available for Android and iOS allows you to share all the content like photos, videos, and documents on your mobile devices and even mirrors your entire device.

During my test, the app was very super fast and reliable and I can how this can be useful during work presentations or even just sharing your latest baby video and photos with friends and family when you have them over at your house!

The LUMOS ATOM is a very capable device and is also the best projector we had reviewed from LUMOS. While it is not the smallest projector you can find out there, the weight and size of the ATOM is the perfect compromise between form and functionality.

Built with a modern Android OS, a 2-hour-long battery, and a bright 6,000 Lumens LED lamp, the LUMOS ATOM will satisfy the demand of most consumers looking to purchase a projector for home usage. The brilliance of the LUMOS ATOM with smart apps like EShare and built-in AirPlay capability will make it the talking point at any upcoming Chinese New Year gathering.