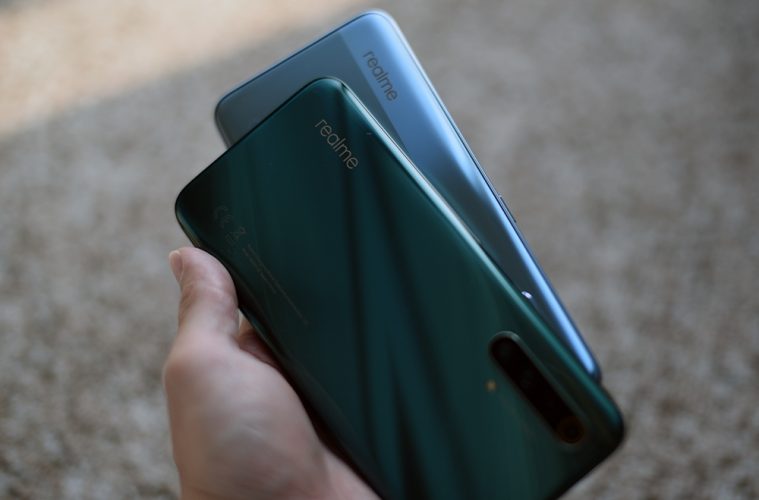 I first reviewed the realme XT two years ago, when the company first made its entry into the Singapore market. Then, realme was creating a range of phones with mid-range specs at a budget friendly price. realme has since became the fastest growing mobile phone brand in southeast asia with a cumulative sales of 50 million units in the third quarter in 2020. It is the world’s 7th largest smartphone brand and one of the top five in Singapore. Not bad for for a brand that is only 4 years old.

Today I get to take a look at realme’s latest two smartphone offerings – the realme X50 Pro and the realme 7Pro. The realme X50 is the brand’s first 5G offering in Singapore, while the realme 7Pro features TüV Rheinland Smartphone Reliability Verification which promises an internationally recognised standard of quality.

The realme X50 is powered by Qualcomm’s new Snapdragon 765G 5G Processor, which the company says greatly improves performance and reduces power consumption by up to 35%.

In the package, the realme X50 comes with a 30W Dart Charger, USB Type-C Cable, Silicone Case, Screen Protector, SIM Card Tool, Info Booklet with Warranty CardQuick Guide. This will probably be one of the last few Android phones in the market that comes bundled with a wall charger in an effort to cut cost and wastage.

The realme X50 has a 48MP AI Quad Camera with 119° Ultra Wide-angle Lens. On the front, it has a dual in-display selfie camera (16MP Primary camera/2MP Portrait Lens).

The camera UI is pretty straight forward. For the novice users, you can easily toggle between the various shooting mode (Night, Video, Photo, Portrait, 48M) and more. There are also colour presets or something realme is calling the Chroma Boost that boost the colours of your photos. Most of the selections are likely to suit the masses photography needs.

For the slightly more advanced users, you can also select the Expert Pro mode that lets you adjust the ISO, White Balance, Auto Focus and RAW settings.

The ultra wide-angle camera captures up to 119° of landscape into the frame. It also comes with portrait distortion correction for distortion-free photos.

One of the key selling features of the realme X50 is its wide 6.57inch, 2400×1080 FHD+ display. It has a 90.4% screen to body ratio with a really thin bezel at the side. Protected by Corning Gorilla Glass 5, it has a 120Hz refresh rate making everything seems super speedy especially when moving in and out of apps. As a comparison, the latest iPhone 12 Pro is still stuck with a refresh rate of 60Hz.

Besides being higher in specs at 120Hz, you can really see and appreciate the difference especially while watching shows or playing games on the realme X50. I never expected to really enjoy the faster refresh rate but everything just felt snappier on the realme X50.

Built into the realme X50 is a large 4200mAh battery. Again, in comparison with the iPhone 12 Pro’s 2815mAh, the X50 promises more juice for your daily needs. It also comes with a 30W dart charger that charges the phone from 0% to 100% in 55 minutes. In my own test, it took about 65% minutes to charge the phone from flat to 100% but that’s still almost 1/3 of what it takes to charge other flagship phones in the market.

I also like the Jungle Green glossy finishing of the realme X50. Everything about the X50 matches up to its flagship status and at 202grams, it feels very sturdy in hands. Under the hood is also a powerful liquid cooling system that really works. In our few weeks of testing, we never felt the phone heating up even while using multiple apps or while gaming.

Taking a step down from the X50 is the realme 7 Pro. Holding both the X50 and realme 7 Pro hand in hand, you could tell immediately that the 7 Pro comes with a more budget price tag with its plastic back finishing. I do find the two-tone finishing was pretty interesting and at 182grams, it’s pretty light on the hand.

Internally, the 7 Pro also runs on a slower Qualcomm Snapdragon 720G (as compared to the X50’s 765G). It also has a smaller 6.4inch Super AMOLED screen. It also has a Type-C USB port and also a 3.5mm headphone jack. Unfortunately, realme chose to go with the standard 60Hz refresh rate (like the iPhone 12 Pro) instead of the 120Hz we saw in the X50. While 60Hz is pretty standard and you probably won’t notice any lag, pitting it with the X50 side by side would show how speedy the 120Hz refresh rate is.

One of the key selling points of the realme 7 Pro is its 65W SuperDart Charging capability. As compared to the 30W on the realme X50, the 7 Pro gives you 42% of battery life with just 10 minutes of charging and a full charge in just 34 minutes. The phone feels cool even when charging at high speed though to achieve such speed, you would have to use the included 65W SuperDart Charger.

Like the X50, the 7 Pro comes a quad-camera system with a Sony 64MP primary camera. It also has a 32MP selfie camera with the same ultra-wide mode, ultra micro mode and portrait mode.

Both the realme X50 and the 7 Pro runs on Andriod 10 with realme’s own UI that was adopted from the Oppo ColorOS 7. The UI is highly customisable and looks pretty much like stock android. I do prefer realme’s UI over Samsung’s which tend to pack in too many bloatware.

realme Watch – Time to get smarter

With the rising popularity in wearables, it’s no surprise that realme has its own smart watch. Simply called the realme Watch, it is the most affordable option at S$149 after the Watch S Pro (S$249) and Watch S (S$199).

To connect the realme Watch to your phone, you will have to download the realme Link app.

The pairing process is pretty straight forward and the watch will prompt and guide you through each step.

Honestly, I think at S$149, it’s hard to fault the realme Watch for any of its shortcomings. It is lightweight and comfortable to wear and has a decent fitness tracking and heart rate tracking accuracy. However, the screen could be more responsive and the battery life is actually closer to 3-4 days than the 7-9 days that is stated on its website.

The realme Watch retails for S$149.