If you ever wanted to purchase a pair wireless active noise cancelling headphones, there is a high chance that you would have come across the Sony WH-1000X series of ANC headphones (besides of course the iconic Bose Quiet Comfort series). 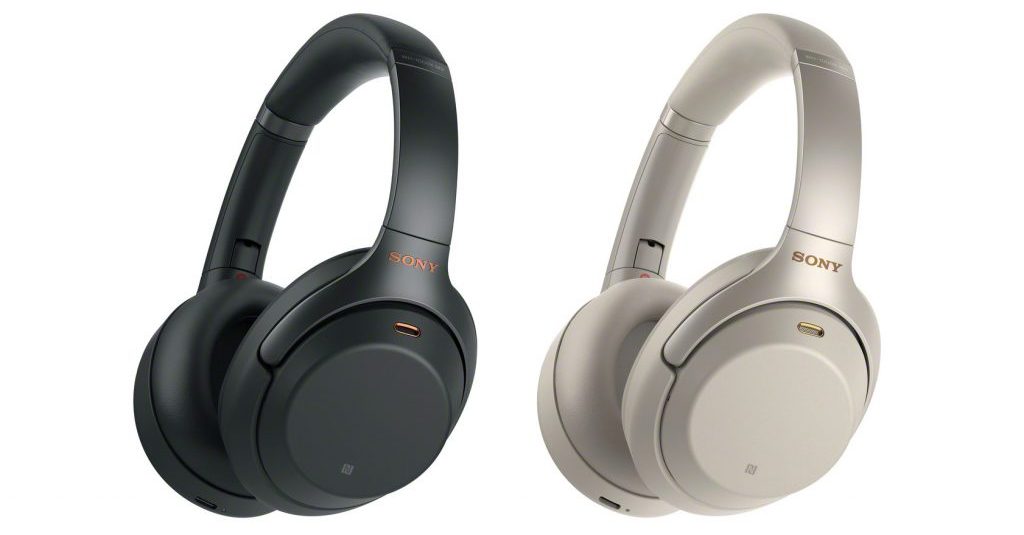 The WH-1000XM3 is the third iteration of Sony’s critically acclaimed ANC WH-1000X series which now comes with 4 times the processing power of its predecessor. Will third time be the charm for Sony to dethrone Bose’s longstanding leadership in the ANC market?

Strictly speaking, it’s hard to tell the Sony WH-1000XM3 apart from the WH-1000XM2 from the WH-1000X. All three headphones in the series feature a similar industrial design – which might very well be Sony’s strategy in creating an iconic look for its ANC series, very much like what Bose did with the QuietComfort series. In terms of design, the WH-1000XM3 features several improvements from the XM2. It is now 20 grams light, thanks to the change from the metal headband to a plastic one and the ear cups are now slightly larger and are fitted with thicker yet softer cushion for added comfort. I do find that I have a very standard pair of ears and head sharp which have no problems adapting to most headphones and the WH-1000XM3 are no different. 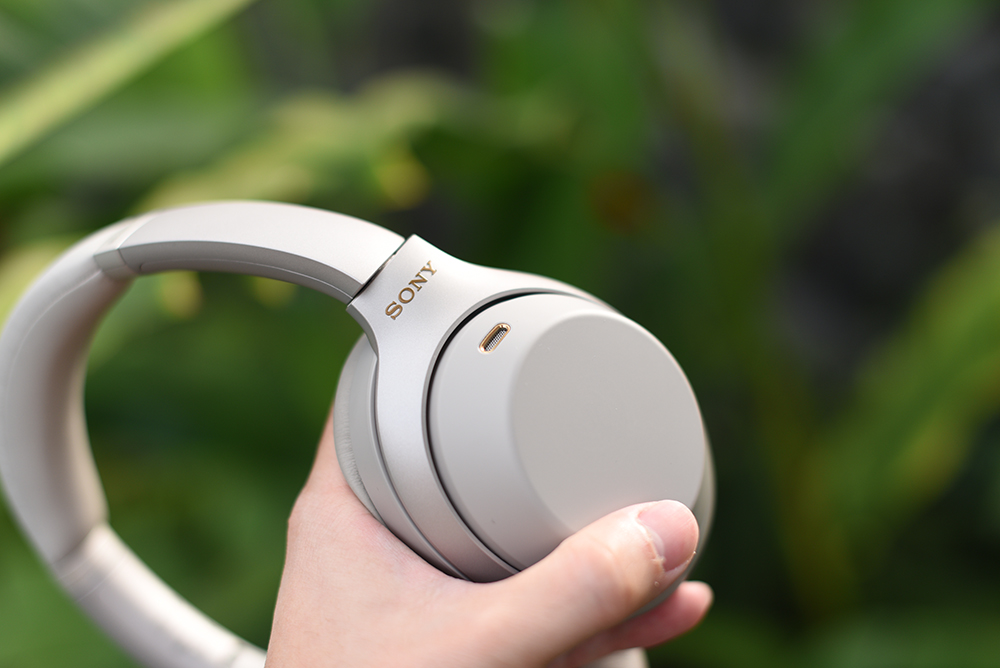 The textured ear cups that we see on the XM2 are also gone. In its place is a smooth, synthetic leather-like surface that also acts as a touch-sensitive control panel on the right ear cup. Play/pause your music or answer a call by tapping the middle of the cup, swipe front/back to change track and up/down to adjust the volume level. The controls are pretty straight forward but in real life usage, it took me a while to accurately glide my fingers across the ear cup to achieve the desired result. 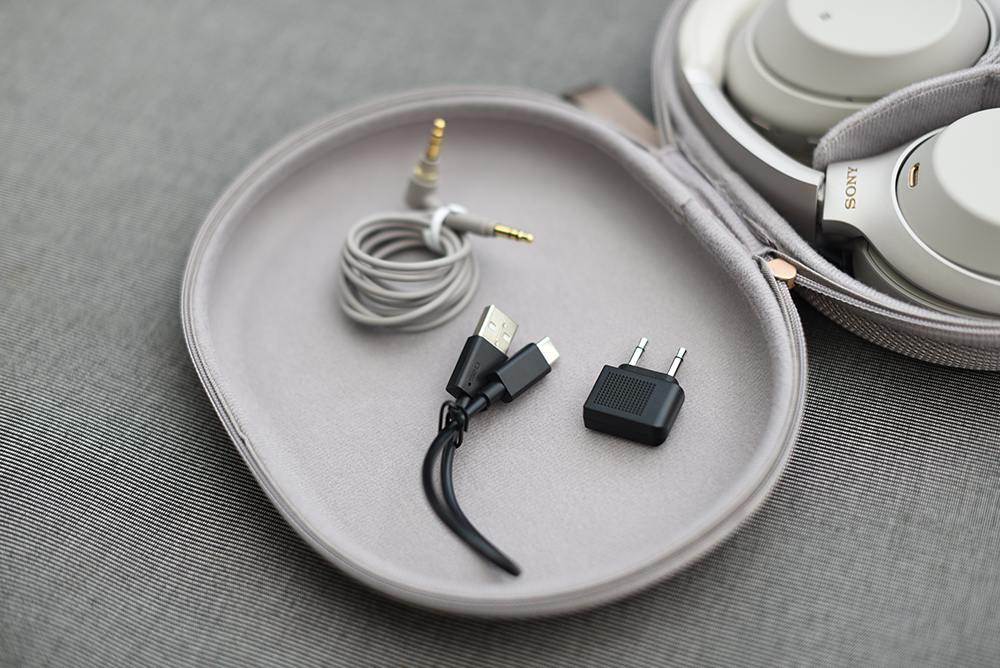 The WH-1000XM3 is also designed to be first and foremost, travel-friendly. Like the previous headphones, it has a foldable design and comes with a hard case with an airplane adapter, aux-in cable and also a Type-C charging cable. By incorporating a Type-C charging port, the WH-1000XM3 gives you up to five hours of audio enjoyment with just a 10-min charge using a QuickCharge adapter. A full charge would take three hours – as compared to four previously. While some might find needing to carry an additional Type-C cable troublesome, I think Sony made a good choice in future proofing the headphones with more devices adopting the Type-C standard. 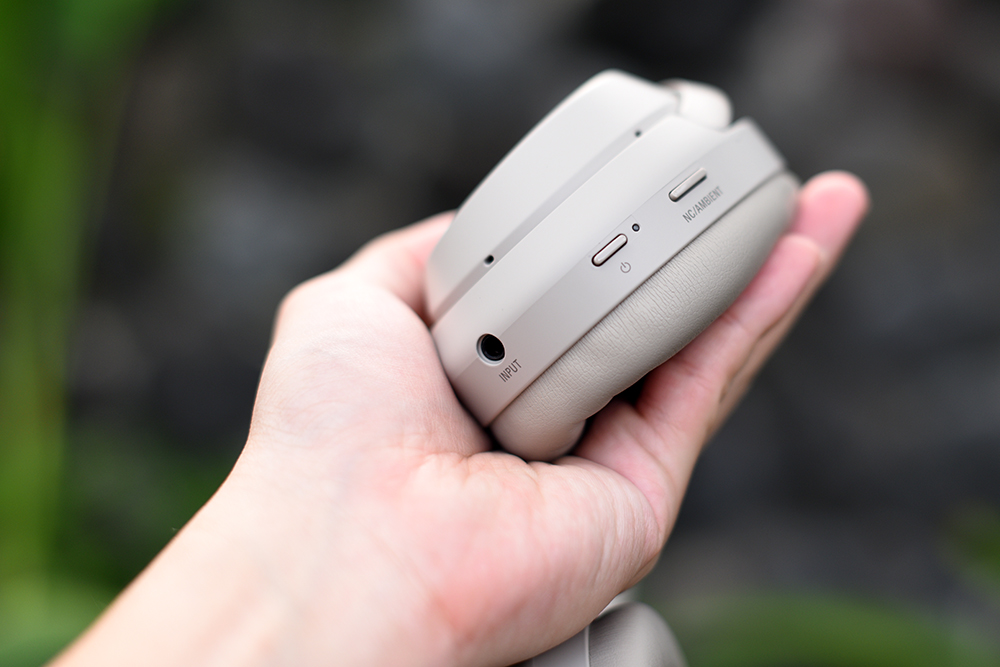 In addition to the touch-sensitive controls on the ear cup, there is an aux-in port (for use with the aircraft’s inflight entertainment system, a power button and a ANC/Ambient button that controls the headphone’s active noise-cancelling and ambience noise functions. 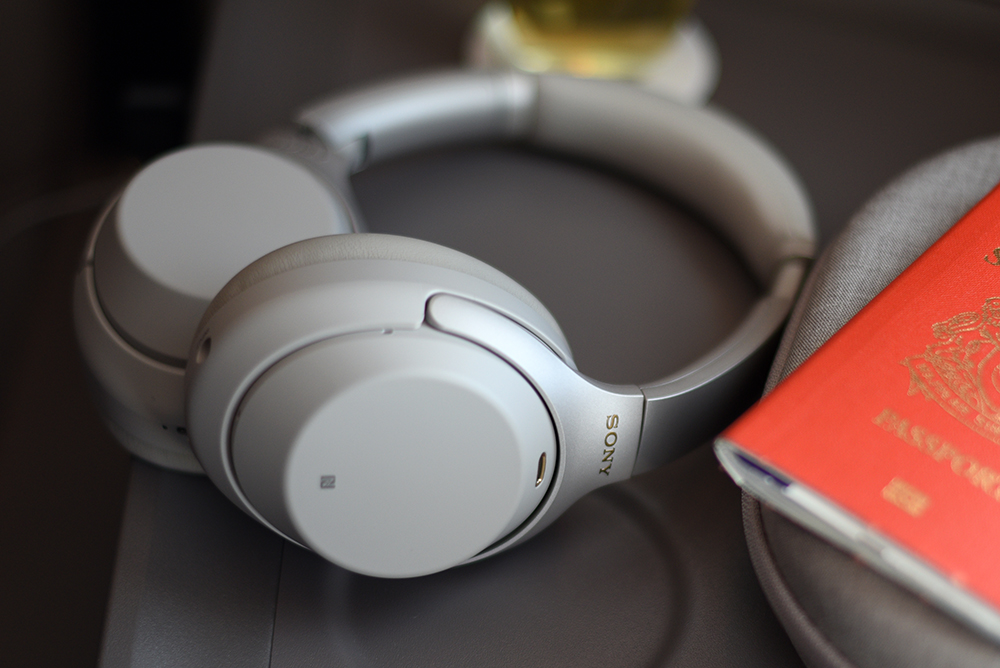 I have tried many active noise-cancelling headphones and there were not many that made me go “WOW” when I turned on the ANC function. But the WH-1000XM3 is one of them.

From the very first WH-1000X, Sony has been chasing the crown of ANC headphones from the hands of Bose. While the company previously integrates the ANC function on the headphone’s DAC, Sony chose to pass all the heavy-lifting this time to its proprietary QN1 chipset. And boy is the difference significant. The QN1 processor doesn’t just provide the noise-cancelling function but also for deliver 32-bit sound quality with the combination of DAC for amplification functionalities.

Coupled with the noise-isolation of the earcups and the active noise-cancelling of the headphones, using the WH-1000XM3 in the office blocks out all the chatters of my co-workers, the photocopying machine and the ringing of the phones, allowing me to focus on the work at hand. On my daily subway commute, the loud humming noise of the train and noisy commuters disappeared once I put the headphones on. 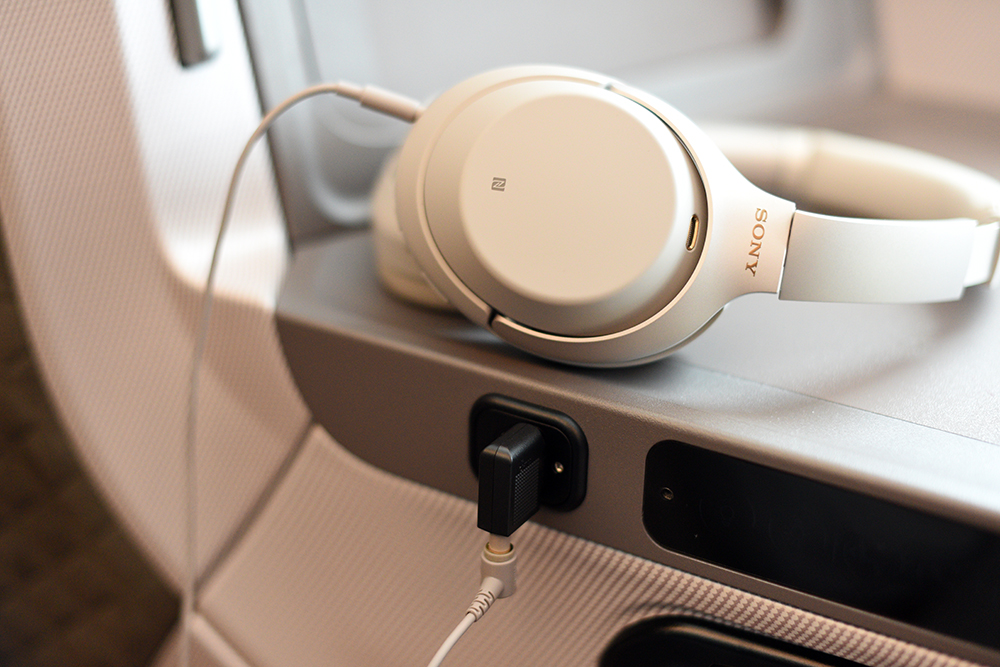 The Sony headphones connect bluetooth App (iOS/Android) provides you with a more enjoyable way to enjoy the  WH-1000XM3. Once you are connected to the headphones via Bluetooth, fire up the app and it should be able to detect the connected headphones. The app itself currently supports 12 models of Sony headphones, so if you have used any Sony wireless headphones recently, the app shouldn’t be new to you.

The App provides an array of features including ambient sound control, sound position control, equaliser, some audio presets and a built-in music player. 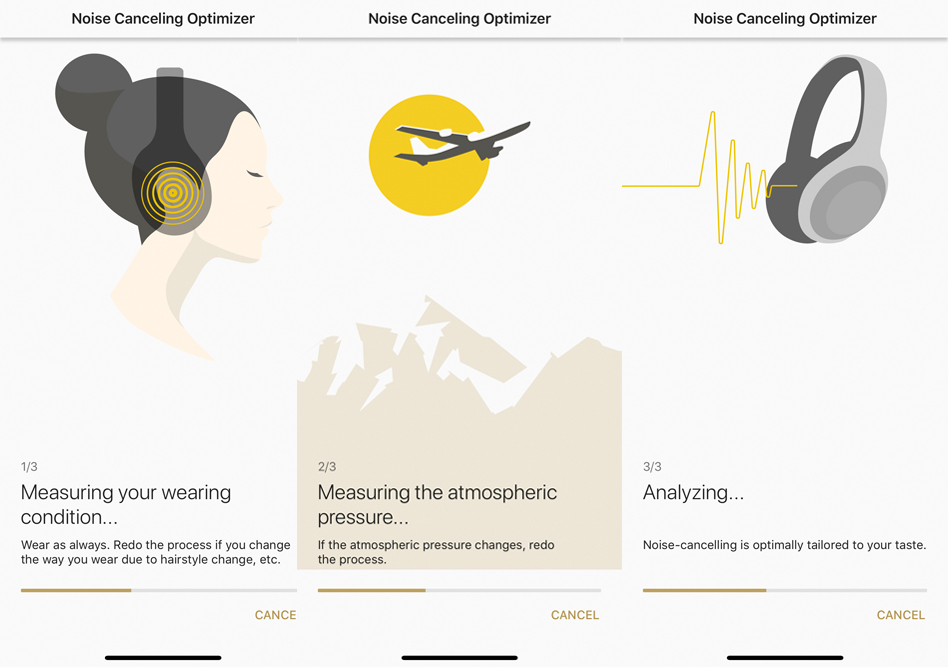 Unlike other ANC headphones, the SONY WH-1000XM3 allows you to optimise the noise canceling functions according to the wearing condition and atmospheric pressure.  It’s a simple 3-step process where the headphones will emit several sound tones into the headset and listen for feedback for optimisation. While the differences not day and night, you can still feel the difference between optimising for the office and for the streets.

The sound position control is a fun feature to play with where you can control which direction the audio is coming from. For example, selecting right section of the sphere will have all the audio focused onto the right ear cup.

The equaliser and various audio presets (or what Sony calls the Surround Virtual Phone Technology) gives you a more control over how your audio sound like depending on the content of your source files. By selecting the different VPTs, your headphones will be able to simulates the different sound fields according to your selection. In the app, Sony has 7 different VPT modes: Studio, Live, Club, Arena, Matrix or Karaoke. 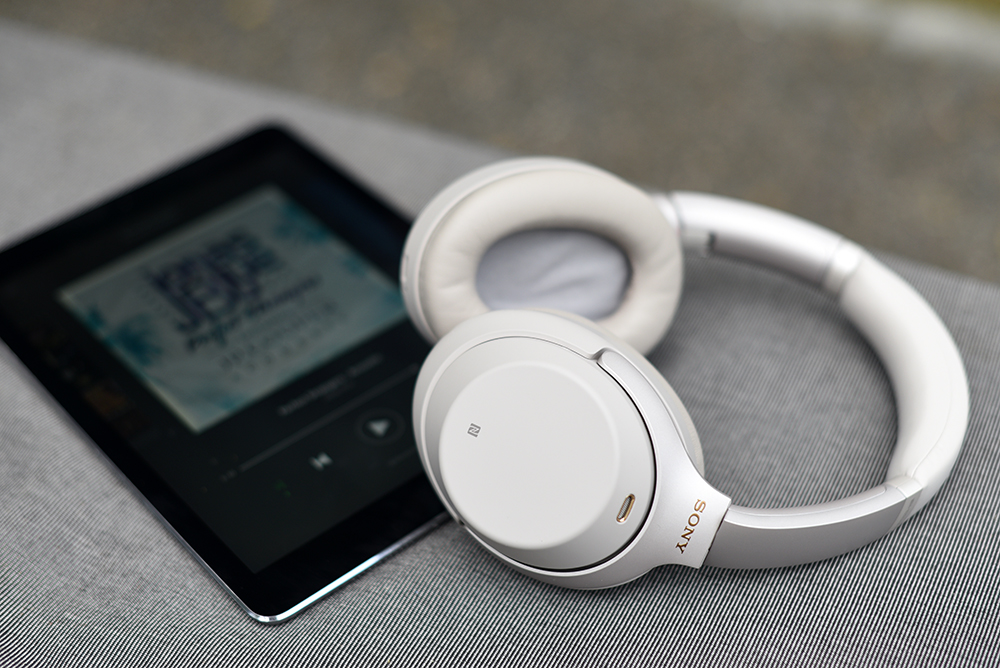 It’s hard to nitpick when it comes to the SONY WH-1000XM3. It comes in a great box, looks good and sounds exceptional. The active noise-cancellation is class-leading in the industry and if you travel often or commute daily and have the S$529 to spare, the WH-1000XM3 is a no-brainer.