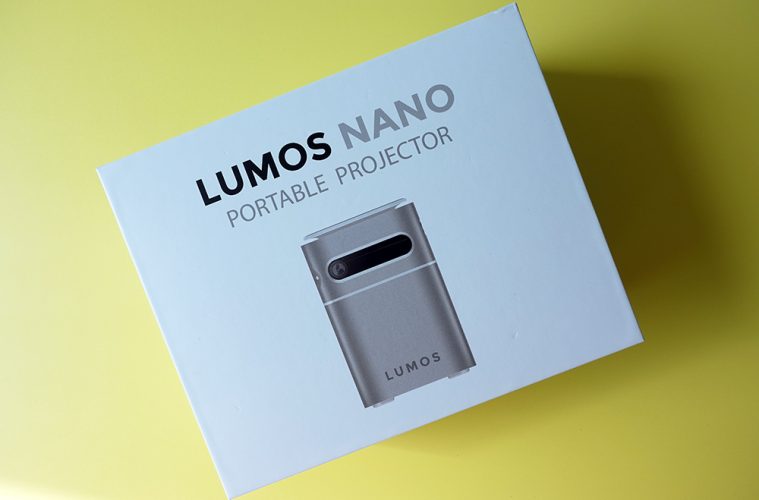 Lucas FooFebruary 15, 2022
NewsReviews0 Comments 2
The LUMOS projector that everyone should get.
Small and portableBuilt-in batteryBuilt-in controlsWide-range of connectivityDecent built-in speaker
Slightly expensiveNot as bright as the rest of the LUMOS projector
90%Overall Score
Reader Rating 5 Votes
97%

If you were ever looking for a projector, chances are you would have heard of the local projector brand LUMOS. The company is known for its affordable and feature-rich range of projectors like the LUMOS RAY and LUMOS AURO. This year, LUMOS is introducing the LUMOS NANO – its smallest home cinema projector yet.

The LUMOS NANO comes in a simple hard white box. Its package content includes the LUMOS NANO projector, a quickstart guide, HDMI cable, Power Adapter, a mini tripod, and remote control. On its website, the company says that at 10cm tall, the LUMOS NANO is “smaller than a drink can” – and it’s true (and also hard to believe)!

It isn’t just small in size, the projector itself weighs just 400grams and it even comes with a built-in battery which makes it truly portable. Imagine bringing this to a rooftop BBQ or a surprise wedding proposal – the possibilities are truly endless.

One of the shortcomings of its elder brother RAY is that it lacks physical controls on the projector itself, therefore you’re pretty much restricted to using the bundled remote to navigate around the system. The LUMOS NANO, however, comes with controls built-in despite its small size!

There was once I brought the LUMOS NANO to a friend’s house without bringing the remote control and thank god for the touch-controls on the projector which allowed me to control it without needing the actual remote.

The LUMOS NANO also comes with a mini tripod stand that is really useful to adjust the positioning of the projector.

There are also many ways to connect to the LUMOS NANO. The smart version comes with an Android 9.0 OS that is preloaded with popular apps like Netflix and YouTube. You may also download your preferred app using the Google App Store on the device as well. The LUMOS NANO is connected wirelessly to your WIFI network.

I have also tried running the LUMOS NANO on a mobile phone hotspot and it works! The best thing about connecting to your own mobile hotspot is that when you’re playing any content on your phone, you can just AirPlay it directly to the projector.

If you’re intending to use the LUMOS NANO during your staycation at a hotel or via a public network, there is a high chance it will not work as usually there is a wifi login page that you will need to bypass. In such cases, you may choose to connect the LUMOS NANO to your laptop via HDMI (cable provided) or store your media on a hard drive or thumb drive and playback directly from it.

The LUMOS NANO also comes in-built with a Dolby Audio speaker which is pretty decent for a device its size. But as you prefer to have a more immersive audio experience with the projector, you may also choose to hook the LUMOS Nano up with an external speaker via Bluetooth or Aux-in!

The included remote control also allows you to control the LUMOS NANO from afar. It is a basic but fully functional remote which is good to have. I honestly love how you can choose to control and navigate around the LUMOS NANO in multiple ways – giving multiple parties access to the speaker through the remote, mobile app, or physical control on the projector. This is especially useful during a house party for example.

The LUMOS NANO runs on an Android 9.0 OS built-in. That means that through the Google Play store, you will be able to download popular apps like iQiyi, Tencent, YouKu to watch your favorite dramas. Out of the box, the LUMOS NANO already comes pre-loaded with the Netflix and YouTube apps to get you started.

Under the settings, you can also have an array of controls in adjusting the projection mode settings, keystone correction, brightness adjustment, color temperature adjustment, fan speed, and even zoom settings.

One of my favorite new features of the LUMOS NANO is the ability for it to project onto the ceiling – it’s literally like having your own cinema in your room while lying on the bed! I never thought of watching it this way to be honest but after trying it, I must say it’s pretty life-changing!

The LUMOS NANO is the third projector from the company and is also my favorite. Its greatest selling point is its portability and built-in battery. The ability to bring this to staycation, rooftop dinner parties, and social events will make you the most popular person in the room. Everyone that I had shown the NANO to was impressed by the video and audio quality from this small projector.

While it might not have as many connectivity options and isn’t as bright as the previous two LUMOS, this is to be expected as the NANO is almost 6 times smaller than the RAY projector and even comes with its own battery. The battery in the NANO lasted the whole 1 hour and 54 minutes of the latest Netflix’s show Tinder Swindle before alerting us to plug it into a power point to charge.

If you’re looking for a portable projector that does it all – without the need to plug into a power socket, the LUMOS NANO is the obvious choice.