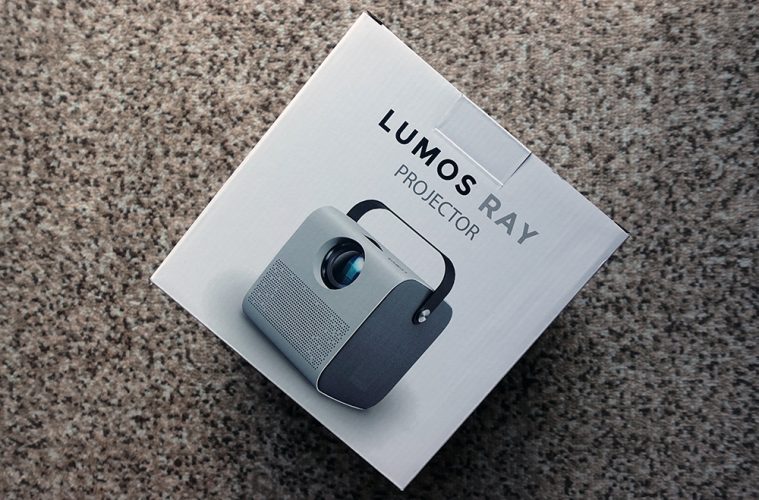 LudacusApril 4, 2021
NewsReviews0 Comments 3
LUMOS RAY Projector Review
Compact and lightweightBright and contrasty even at 3000 lumensAffordable and feature packed
Does not come with built-in controls on the projector
90%A great all-rounder that does it all for a low price.
Reader Rating 47 Votes
55%

If you have been looking for a projector, chances are you would have heard of the local company LUMOS – whose AURO projector became a hit amongst the youngster with its slick social media marketing and affordable price-point. One of the comment I had of the original AURO projector was that the size might be a tad too big for some, especially if you’re looking to transport it around or if your room is too cramped to accomodate a full size projector. LUMOS’ new projector – the LUMOS RAY – is designed to address this issue.

The LUMOS Ray comes with (almost) everything you need to get started. Right out of the box, you have the LUMOS RAY projector, a remote control, a power cable, an AV cable, a HDMI cable and also a quick start guide. It was a nice touch to include a HDMI cable with the projector which was puzzling that the remote control didn’t come with the batteries as the RAY projector doesn’t come with built-in controls, making the remote the only way of controlling and navigating around the RAY projector.

My first impression of the LUMOS RAY projector was that it’s very cute and non-intimidating. In fact, it reminded me of WALL-E, the machine in the Pixar animation of the same name. Specs-wise, the LUMOS RAY features a brightness of 3000 Lumens with a projection distance of up to 3m, giving you a screen size of up to 150″.

At the back of the LUMOS RAY, you can find all the inputs to the projector. There is a headphone jack (for private listening at night), an AV jack (for legacy AV devices), a HDMI port, a USB port and a microSD slot. These input options basically allows you to mirror your laptop content, connect a TV setup box or play content directly from a hard-disk or microSD card. At the lower half of the projector is where the power cord will be connected to the projector. Unlike some similar compact projectors in the market, the LUMOS RAY doesn’t come with a built-in battery.

The LUMOS RAY (like the LUMOS AURO) comes in two versions – a regular and a smart version. The smart version is powered by a simple Android 6.0 OS which lets you access popular Android streaming apps like YouTube and Netflix natively off the projector.

The Settings tab lets you connect the LUMOS RAY to your home’s WIFI (it doesn’t support the wired LAN connection), Bluetooth devices like keyboards and mouse to the projector and also adjust vertical and horizontal keystone correction.

This is my favourite feature as you can place your projector slanted and adjust the correction to project a straight image. If you select auto, the projector will just adjust itself as you shift the projector. Pretty cool!

The LUMOS Ray has 2 (4Ω3W) inbuilt Dolby Audio Speakers that gets really loud. Another cool feature is that you are able to connect your mobile devices to the LUMOS RAY and use it as a Bluetooth speaker! Once you select this mode, the projector automatically shuts down so that there will be no fan noise interrupting your music playback.

Even at 3000 lumens, the LUMOS RAY performs very well in a dark environment. While the LUMOS AURO has double its brightness at 6000 lumens, there isn’t really a stark difference even when placed side by side (though I would say that the images are more vibrant with the LUMOS AURO.

Should you get the LUMOS AURO or LUMOS RAY?

Having experienced both the LUMOS AURO and LUMOS RAY, I would say that the question would be how would you be using the projector and what do you value more?

The first time I saw the LUMOS RAY, I already loved the form factor projector as I knew it would be a good additional to my (very small) room. It is simple to use and comes with most of the apps and accessories to start projecting with almost no learning curve. The RAY is also a $100 cheaper than its predecessor with a look that is more compact and non-intimidating which would definitely appeal to the younger demographics.

And if you do not need the smart version, the LUMOS RAY can be yours for just S$199!

If you are looking for an affordable, great performing projector that does it all, you can’t really go wrong with the LUMOS RAY.