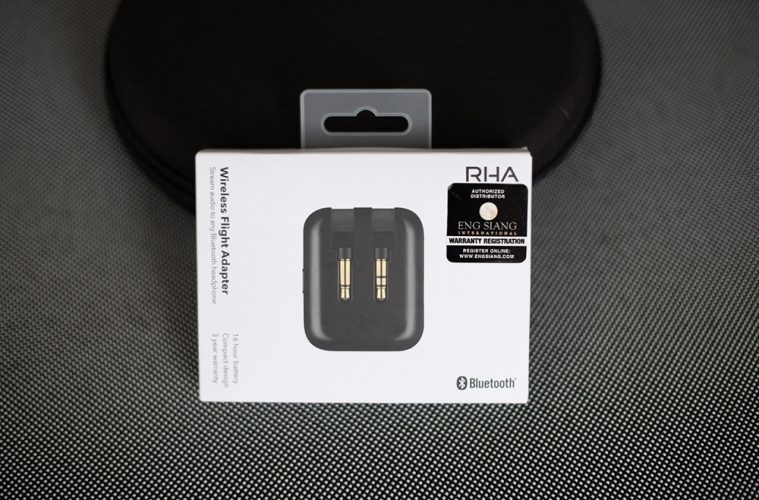 If you’re an avid traveller or travel frequently for work, chances are, you would have invested in a good pair of noise-cancelling headphones like the Sony WH-1000XM3 or the Bose Noise Cancelling Headphones 700. However, to use it with the plane’s Inflight Entertainment System, you would have to connect the headphones via the airplane adapter and then to the AUX-in cable for the headphones to work. And if you have the latest Airpods Pro or Sony WF-1000XM3, you would be even more out of luck as these true wireless earphones do not come with aux-in connectivity. That’s where the RHA Wireless Flight Adapter comes in useful.

In the box, you will get the RHA Wireless Flight Adapter, a Type-C charging cable and an instructional leaflet. The flight adapter weighs a mere 23g and measures 44 x 53 x 16mm. Shape-wise, it resembles a lighter and smaller version of the Gen1 Apple Airpods in matt black.

On the front of the flight adapter is an LED light and at the bottom is the Type C charging port. To pair the adapter to your headphones, simply press and hold the pairing button till the LED light flashes blue and then start the same pairing process on your headphones. Once paired, the adapter will show a solid blue light to indicate that it is connected to your headphones. You only need to do this process once. The next time you turn on your Bluetooth headphones and the adapter, it will automatically be paired with each other (if its the last paired device).

While it’s unlikely that you would buy the RHA Wireless Flight Adapter for use with your laptop or iPad as most would have built-in Bluetooth, it does provide some value-added feature like the ability to stream to two different Bluetooth headphones at the same time and also the aptX codec which gives you better wireless audio quality.

The greatest value the RHA Wireless Flight Adapter brings would be of course to allow you to enjoy your inflight entertainment content – in the wireless comfort of your active noise-canceling headphones. Simply lift up both pins of the wireless adapter and plug it directly into the dual-headphone jacks of the airplane.

While it sounds simple enough, there was only one issue with it – I couldn’t get it to work properly on the headphone jack of my plane’s seat. I tried it on both my flights and every time, the adapter only streams a mono-stream to one side of my headphone’s earcup. I made sure I insert the adapter tighter and tried every position possible. Finally, I found that the sweet spot is to insert the adapter about 90% into the headphone jacks and slowly adjusting the dongle till you receive a stereo audio stream on both earcups. This issue only happens when you use both the pins of the adapter. It works perfectly fine with just one pin inserted into my iPad and MacBook.

In terms of battery life, RHA states a 16-hour battery span per full charge. In my real-life testing, I feel that the actual battery life is somewhere close to 12 hours. I would advise you to charge it before each flight just to be safe or you can charge it on the plane when it runs out of battery with the included USB Type-C cable.

Overall, the RHA Wireless Flight Adapter is an interesting device that attempts to solve the age-old problem of letting you enjoy your inflight entertainment wirelessly. However, the device didn’t work as advertised for me, has a shorter than advertised battery life and at SGD $98, it’s a tad expensive for something that you could easily forget to remove from the seat of your plane.