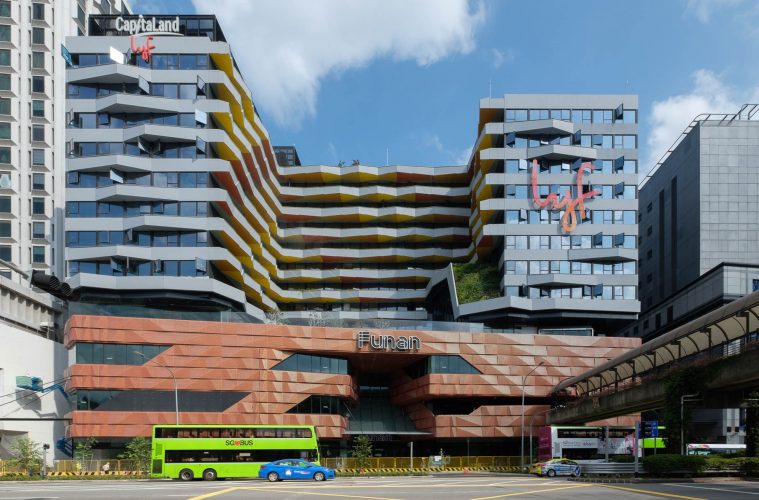 Exactly three years ago today (30 June 2016), Funan Digitalife Mall opened its doors to the public for the last time. The mall was subsequently demolished, and underwent a major revamp costing $560 million.

Fast-forward to today, the mall opened again, ahead of schedule, on 28 June 2019. I braved the crowds to have a look at what’s new, as well as to take some photos.

As far as I can remember, the mall has went through 3-4 iterations, from the dim and dingy mall specialising in IT and computer gear, to the slightly more modern one of the last iteration before it was torn down.

Funan today is a glitzy and futuristic looking mall, with large, bright LED screens, and colourful lights all over the place. Entering from the North Bridge Road side, you’ll be greeted by a giant digital display, which also doubles as a digital clock.

The centrepiece of the mall is the 25m-tall structure known as the “Tree of Life”. It extends from B2 to level 4, and consist of 20 retail pods for brands to showcase their products, pop-up stores, etc.

For the shot above, I used a long exposure of 2 minutes, which pretty much removes most of the crowd from the shot!

All the pods of the Tree of Life are linked with stairs, and you can freely explore them.

At the base of the Tree of Life at Level 1 is the amphitheatre, where you can catch a performance, or sit and relax with your friends and family.

Running along one side of the mall is what I thought is the craziest “feature”—an indoor cycling track. It begins from the North Bridge Road entrance, and goes right into the mall. Thankfully, according to mall rules, cyclists can only use the track from 7am to 10am everyday, before the mall opens. After 10am, they’d have to dismount and push their bicycles.

The base of the Tree of Life also has a rock climbing facility by Climb Central.

Few of the mall’s previous owners, like T K Foto, Alan Photo, and Inforcom took up shop spaces in the new Funan as well. T K Foto has even diversified into selling speakers and headphones too!

From the forth level, you can take a series of stairs to the rooftop Urban Farm, where vegetables are grown both indoors and outdoors.

The rooftop also gives a view of the Supreme Court and part of the city skyline. It’s pity that the sky was dreary after a morning of rain when I was up there.

If veggies are not your thing, there is a futsal court, and places where you can sit around and relax, though I doubt you’d want to in the typical hot and humid weather here. Alternatively, you can take a swing at the one of the few swings up there.

Near to the information counter at the basement, there is a lego model of Funan. I believe it was also showcased at the Funan Showsuite nearby before the mall was opened. The model is pretty well made!

Like many of my friends, I still prefer the old Funan. I used to hang out there quite often, and it was also the place where I’d meet up with my friends. The revamped Funan, also more futuristic and modern, lacks character, and is just like any other mall.

The retail mix of IT-related stores seems to have dropped as well, with the more focussing more on lifestyle/F&B. This makes it even more generic. Only time can tell if this change will be a good one.