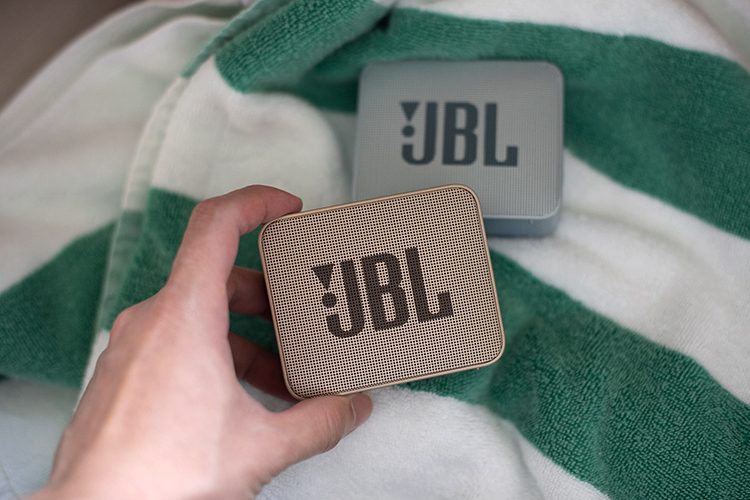 JBL has enjoyed much success with the JBL GO portable mini Bluetooth speaker. It was compact, comes in an array of colors and at just S$59 (most places are even selling it at a clearance price of S$39 now), it if definitely one of the more affordable speaker in its class. 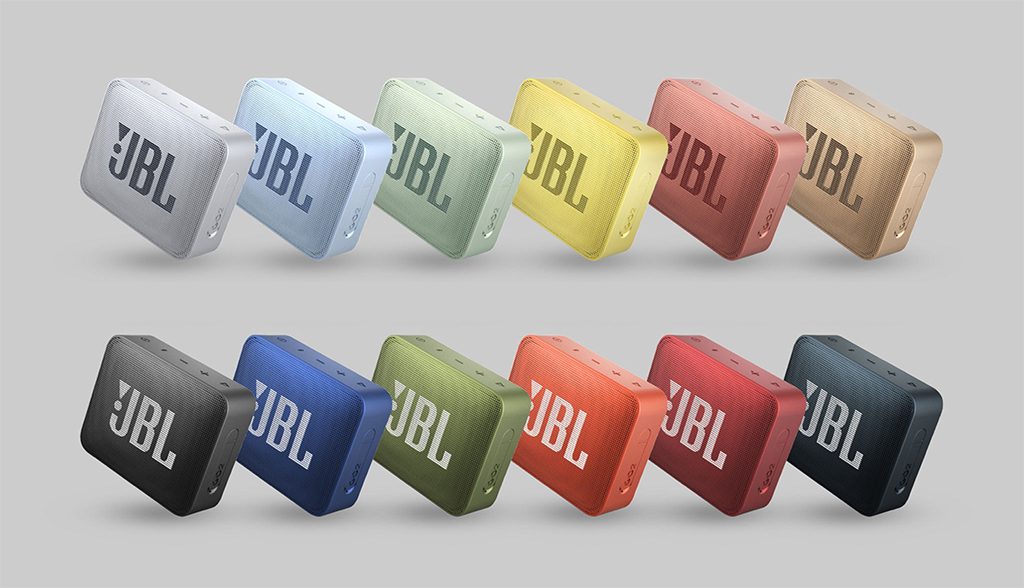 In many ways, the JBL GO 2 bears the hallmarks of the original GO. While it retained the boxy design of the GO, the GO 2 looks more modern with its curve edges and metallic finishing. JBL also decided to go big this time by having 12-color options, double the number of colors the JBL GO was available in. The biggest improvement is of course the IPX7 certification, which makes the GO 2 waterproof as compared to the GO 1 which had none. 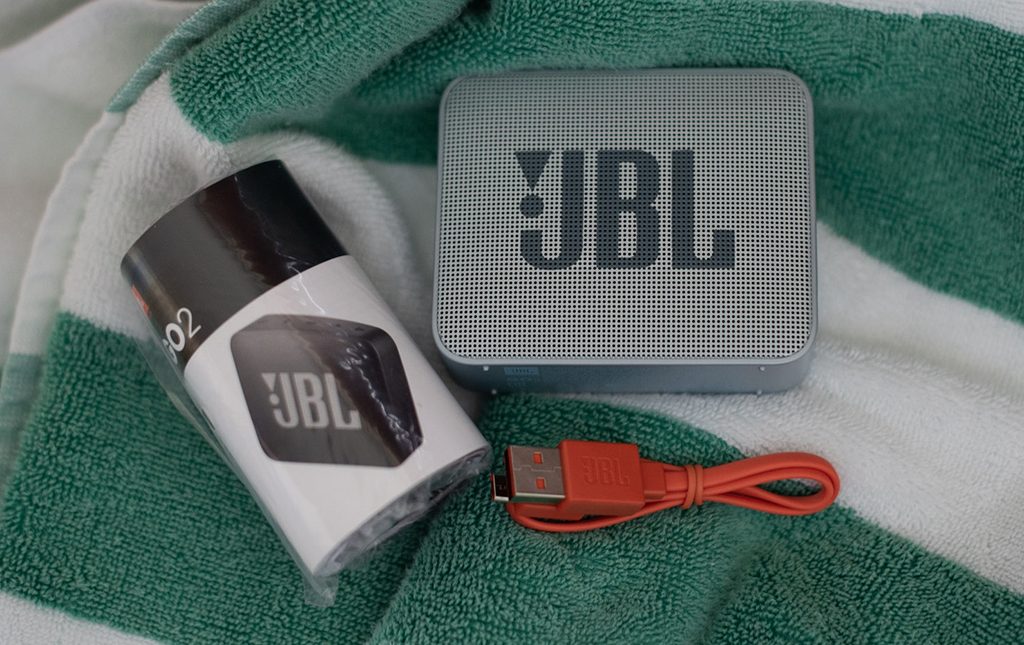 The JBL GO 2 like its predecessor is positioned as a budget Bluetooth speaker. It is therefore unsurprising that besides the quick-start guide and safety sheet, only a microUSB cable is bundled for charging. The orange cable is the same one that we have seen been bundled with other JBL products like the JBL Pulse 3. 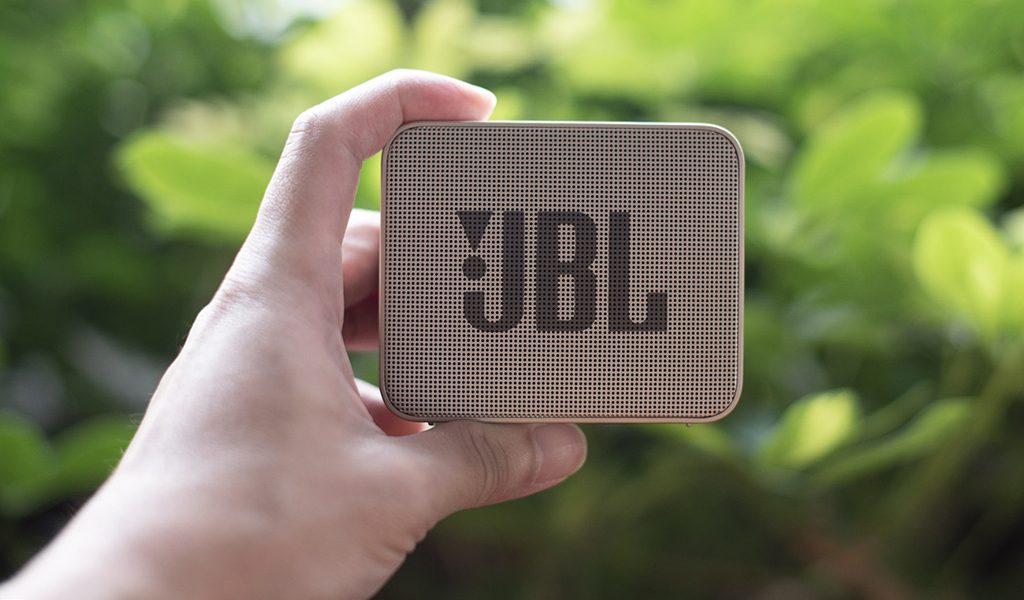 With the GO 2, JBL chose to adopt the tagline “Grab and go” for its marketing campaign for a good reason – it’s super compact and portable! The GO 2 fits nicely into your palm and has a good weight to it (184g). The smooth curve edges give it a modern, un-intimidating look that is usually associated with tech products. JBL also did a good job with the 12 pastel color selection (Ash Gray, Icecube Cyan, Seafoam Mint, Lemonade Yellow, Sunkissed Cinnamon, Pearl Champagne, Midnight Black, Deep Sea Blue, Moss Green, Coral Orange, Ruby Red, Slate Navy) which looks more muted and classy when compared to the bright and colorful selection of the GO. 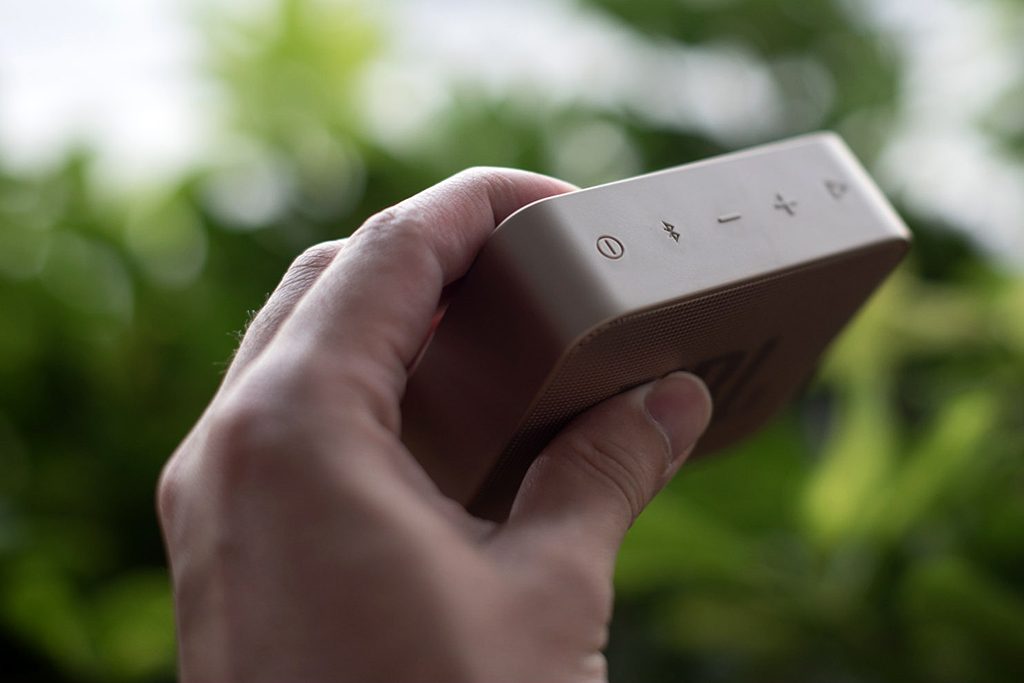 The controls on the JBL GO 2 are pretty simple and straight forward. There is a power button to turn on and off the speaker, a Bluetooth button for pairing, a volume increase and decrease button and lastly a play/pause/answer call button. You can also activate Siri or Google Now by long-pressing the play/pause button as well. At the side of the speaker is a noise-canceling microphone which worked pretty well for our phone calls. 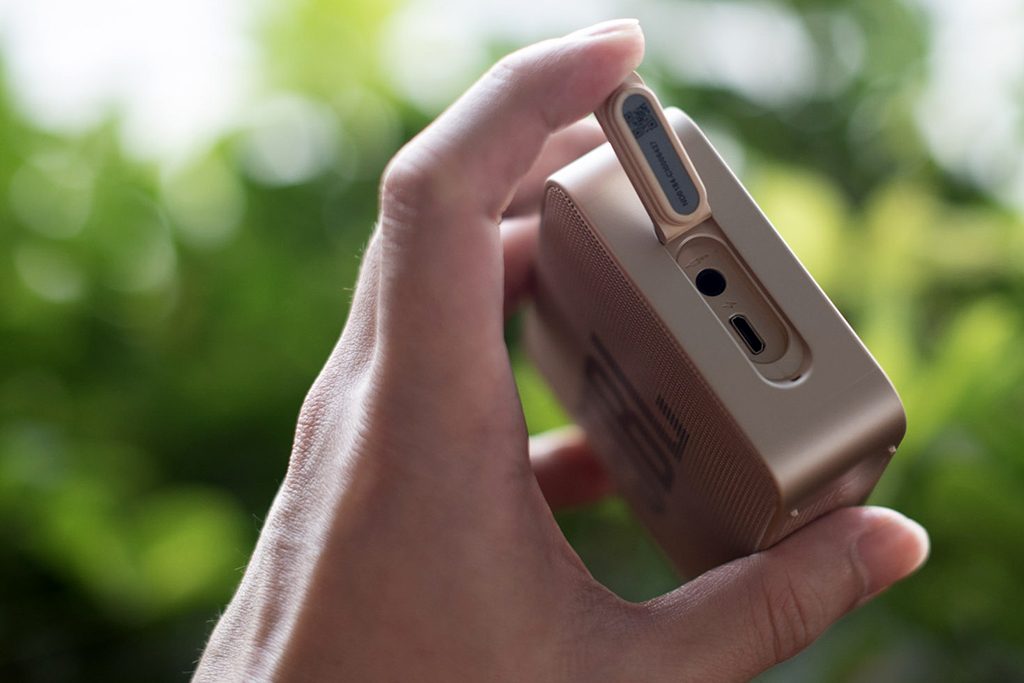 In terms of functionalities, the JBL GO 2 doesn’t differs much from the GO. Besides Bluetooth connectivity, the GO 2 has a Aux-in jack for analog music playback and also a microUSB jack for charging. It’s a little surprising that JBL didn’t take this opportunity to upgrade the GO 2 with additional functionalities like a microSD player, true wireless pairing or even support for its own Connect mobile app. It feels like the old JBL GO … in a new skin.

The GO 2 has a larger 730mAh battery as compared to the 600mAh on the original GO. JBL claims that the battery life of the GO 2 is rated at 5 hours depending on the volume and audio content. We ran our Spotify playlist on the JBL GO 2 at 50% volume and managed to squeeze out nearly 4 hours and 30 minutes of playback time.

One perplexing issue with the speaker is that, there is absolutely no way to tell the battery life remaining on the speaker. When connected to a smart device, the speaker doesn’t show up in the Batteries notification section on the iOS. Even when charging, the indicator light will remain Red and changes only to white when it’s fully charged. 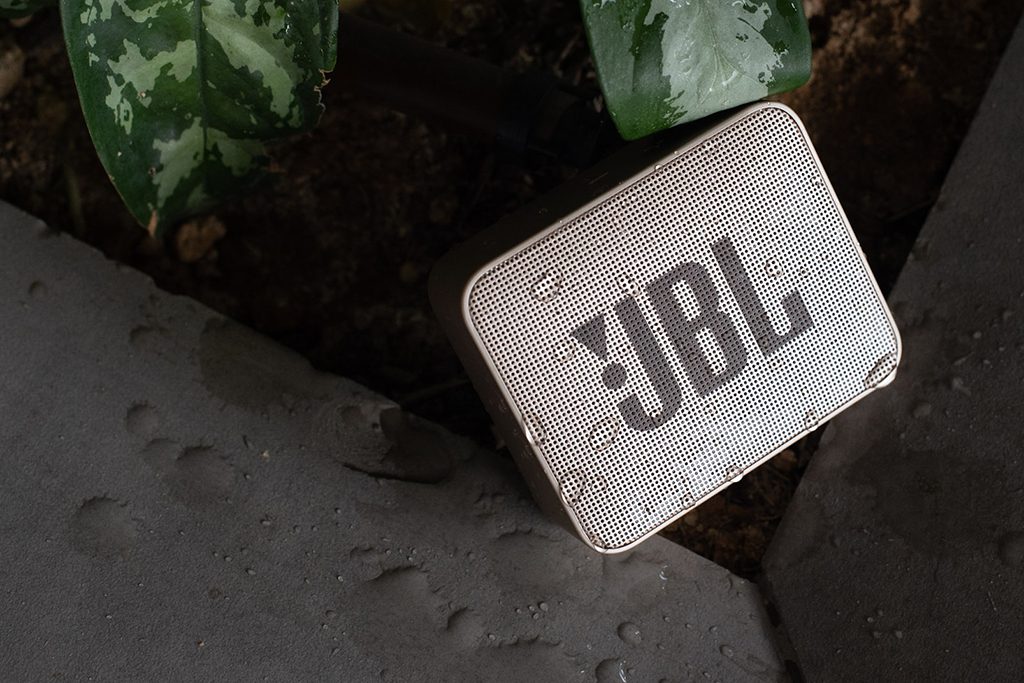 The biggest upgrade for the JBL GO 2 comes in the form of the IPX7 waterproof housing, something the company defined as being “immersed in water up to 1m for up to 30 minutes”.  While water-resistance is now a common feature in most portable Bluetooth speaker, I’m not sure how many of us are willing to pay more or to upgrade our old speakers simply for its IP-protection. 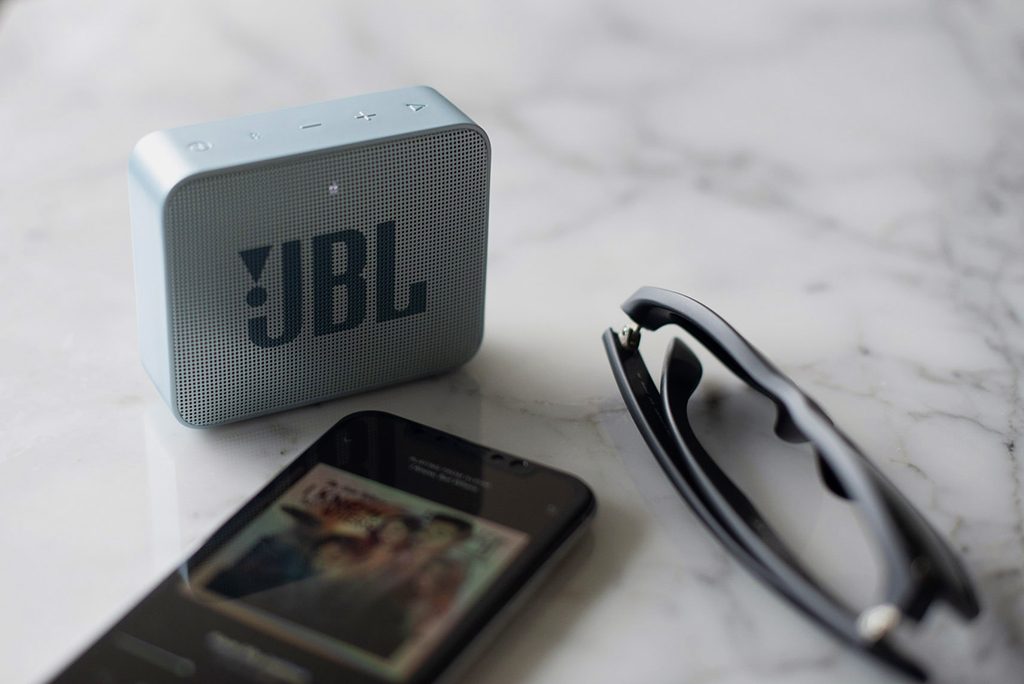 The JBL GO 2 has a 40mm driver and a passive bass radiator behind the front metal grill. It has a frequency response of 180Hz – 20kHz and a SNR of ≥80dB. The speaker gets really loud, a pretty impressive feat for its size. However, there is not much audio separation to speak of, but that is expected of a single driver, mono speaker.

Where the speaker really shines besides its loudness are the mids and the highs. We could hear the clarity and richness of the vocals on Passenger’s Caravan track with the subtle and well separated guitar cords in the background.

The JBL GO 2 however, struggles on bass heavy tracks like ZAYN’s Let Me. The bass are thin and lack the depth that makes ZAYN wants to do those things to you. 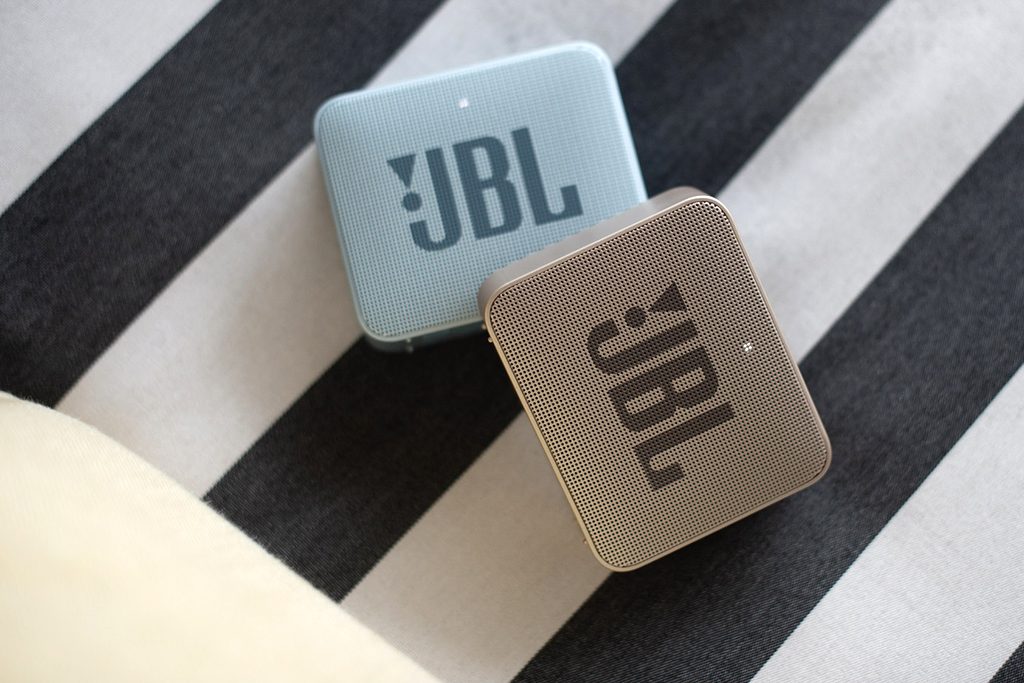 The original GO was one of JBL most successful speaker, selling more than 10 million units in over 3 years.  JBL hopes to replicate this success with the JBL GO 2 with a design refresh and the addition of IPX7 water-resistance.

The GO 2 is almost similar to the GO in other aspect especially in the audio and battery performance. While we feel that it’s a missed opportunity for JBL to include additional features to make this a truly worthwhile upgrade, the company might be holding back on the frills to keep the price point the same for a smooth product transition.

If you’re looking for an affordable, loud and waterproof speaker, you won’t go wrong with the JBL GO 2. However, if you love your bass and would like to connect your speaker wirelessly to another unit, you should give this speaker a miss.